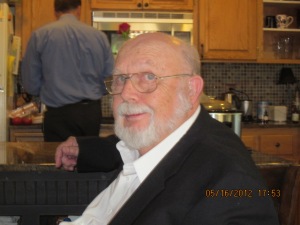 Dr. Franklin D Pedersen, “Pete”, passed away March 29, 2019, at the Village of Belmar, Lakewood, CO.  Franklin was the last of seven children of Anton and Mary Green Pedersen.   His siblings were Jess, Margy (Christensen), Charles, Arthur, Maurine (Farnsworth), and Robert.  He was born in St. Paul, Nebraska, on February, 22, 1933.  He grew up in Nebraska and Iowa and graduated from Riverton (Iowa) High School in 1951.

Pete is survived by his wife of 57 years, Dr. Katherine Pedersen, and two children, Craig Franklin Pedersen and Lorraine (Foley) Carroll.  He is survived by three grandchildren, Brenna, Erin, and Mark Foley, and several nieces and nephews.

A memorial service commemorating Pete’s life will be held at a later date.  Donations in his name may be made to the Department of Mathematics, Peru State College, Peru, Nebraska.

Life changes, no matter how you plan for it. The images you have in your head are no longer the pictures of your life. This is my story of moving into an assisted care facility with my husband.